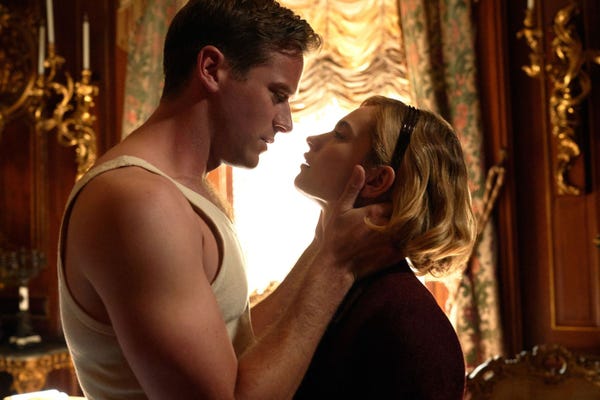 "Rebecca," one of Netflix's big fall film releases, is an adaptation of Daphne du Maurier's legendary gothic novel of the same name.

The story is a splashy tale that begins in Monte Carlo where an unnamed young woman, orphaned and working as a lady's maid is swept off her feet by the dashing aristocrat Maxim de Winter and his sudden proposal of marriage.

She can barely believe her luck, but everything takes a sour turn when the pair return to Manderley, her new husband's vast country estate where she realizes that the ghost of his first wife Rebecca, who died in mysterious and disturbing circumstances, still rings large.

Her insecurities quickly bloom out of control and Rebecca's lingering soul threatens to destroy their marriage and jeopardize their freedom.

Why you should care: "Rebecca" is a classic gothic tale and Netflix's adaptation is stacked with an A-list cast.

Daphne du Maurier's "Rebecca" is a literary classic that remains one of the seminal texts in gothic literature. The book has never been out of print since its first publication in 1938, and it has sold millions of copies in many different languages.

Netflix's adaptation is directed by British writer-director Ben Wheatley, who has built an acclaimed reputation with his gory, psychedelic horror films.

And the film boasts an attractive cast, including Armie Hammer as the handsome widower Maxim de Winter, Kristin Scott Thomas as the frightening housekeeper Mrs. Danvers, and Lily James as the new Mrs. de Winter, a bright-eyed commoner who lives painfully in the shadows of Maxim's revered ex-wife Rebecca.

Mrs. Danvers is perhaps the most ambiguous character in Du Maurier's story. She's the caretaker and chief servant at Manderley. The gatekeeper to an alien, aristocratic world, she uses her influential position at the manor to torment the new Mrs. de Winter, who she's convinced is trying to take the place of her beloved Rebecca.

It is never explicitly stated why Mrs. Danvers is so devoted to Rebecca, but Scott Thomas pulls from all her powers of restraint and seduction perfected across her 30-year career — the slight arch of an eyebrow, a subtle yet pointed look, a small twitch of her top lip — to convey the character's complex desires and insecurities, ultimately revealing the queer sub-text tucked in between the lines by Du Maurier.

Another masterclass by Scott Thomas!

Hammer never manages to settle into the mysterious and uncomfortable skin of Maxim de Winter.

The emotional commitment required to pull off the role appears to be one or two decibels above Hammer's range. He is only able to perform in one-dimension and never kicks into the deeper gears that the story demands.

As a result, we have none of the haunting, muted rage of Du Maurier's novel. Instead, Hammer's performance feels like a symptom of the vapid Hollywood polish that Netflix tends to impart on all its general cinematic offerings.

The role of the challenging, demanding, and mysterious Englishman is much better executed by Daniel Day-Lewis in Paul Thomas Anderson's 2019 film "Phantom Thread," another loose descendant of Du Maurier's novel.

The bottom line: We don't need any more "Rebecca" because we all know everything that happens in "Rebecca."

Du Maurier's novel is an unshakeable classic. "Rebecca" has enjoyed countless adaptations — Hollywood, Bollywood, stage, opera, and radio — the most famous is, of course, Alfred Hitchcock's beloved 1940's Oscar-winning film. It's why the clever plotting that forces audiences into submission, and is so fundamental to the success of all its predecessors, is missing in Netflix's adaptation.

In short, we don't need any more versions of "Rebecca" because we all know everything that happens in "Rebecca."

Speaking with Empire magazine after the film's trailer was released in September, director Ben Wheatley said that he didn't want to make a Hitchcock adaptation. He instead wanted to make "something that had more love in it."

And indeed, we feel Mr. Wheatley's intentions through the film's hearty production design and punchy costumes.

But this simply doesn't fit Du Maurier's novel. "Rebecca" is not a story about love. It is a cold tale about jealously and how far jealously entwined in social anxieties around class, gender, and sexuality can take the human psyche into oblivion.

Netflix's world of Manderley is far too small and simple to make any real interventions into a ghost story known and beloved by so many.

The 20 best murder mysteries you can stream online, ranked by critics

The 101 best movies to watch on Netflix right now