Jonathan Bailey, who plays protagonist Lord Anthony Bridgerton in the show’s second season, spoke about how sex scenes on the show are filmed during an interview with The Sunday Times, saying the are shot with “the female gaze” in mind. He then confirmed that the show works with intimacy coordinators and makes sure “no one goes into a scene quaking, worrying about how it will go. If you are concerned, you can talk to them.” 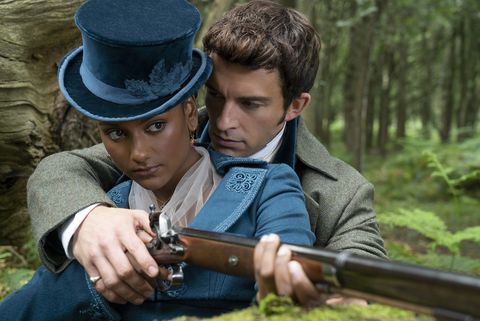 Actors are also given consent forms to sign before each sex scene “consenting which bit of skin we are going to show in each scene and where we will be touched and how.”

“It turns sex scenes into a choreographed dance,” Jonathan explained, adding that “For a man it is less exposing. I wanted to make sure Simone [Ashley] felt safe as a newcomer on set.”

In case you haven’t read the book / obsessed over the trailer, Bridgerton Season 2 focuses on Lord Anthony Bridgerton (obviously), and a love triangle he finds himself in with sisters Kate and Edwina Sharma. Please join me in blocking out approximately 8 hours in your life to watch the entire season at once, thx.